Stars:  3 / 5
Recommendation: A thoroughly entertaining feature film with a tinge of mythology, a dose of ethics, a dash of stunts and a lot more punch of fun in it.

Yamudiki Mogudu ( = One who trumps Mr. Yama himself!) is a hit 1988 Telugu (Indian Language) action-fantasy film starring Chiranjeevi, Vijayashanti and Radha. This film marked the 100th film for Chiranjeevi. The plot deals with Kaali - a small town Robin Hood, Yama - Lord of Underwood and the challenge he throws at Yama for his wrongful death. 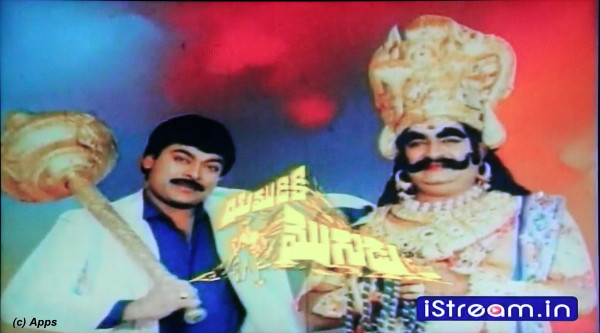 The reason for me to pick this movie was because of one particular song from this film that was remixed for another Telugu film that released earlier in the year 2016. That remix song made me want to watch the movie the original song was from. Thus the review. (Check Spoiler Alerts below for details around the remix song)

Will he continue as Balu and take on the hurdles Balu used to face, clear them? Will he go back to his village as Kaali, avenge his death and claim his bride? Or will he remain as Balu and claim Gauri (Portrayed by Vijayashanti) as his bride - since she was Balu's love interest? Will his body rule his soul? Or will his soul rule his body? What will Kaali do when his previous life interacts with Balu's current life? How will Kaali / Balu's lives end in the end?

As with any Chiranjeevi - Radha -Vijayashanti combo films, this one also comes with some good music. Apart from Andam Hindolam there are other tunes that are somewhat remembered even after almost 30 years of the release of the film. Music composed by Raj-Koti, Lyrics penned by Veturi Sundararama Murthy - a combination that vouches for some amazing songs. S. P. Balasubrahmanama, Mano as Nagoorbabu, P. Susheela, and S. Janaki constituted of the Singers for these tunes. Here are the all the songs from the film:

Note the beginning tune of the song Andam Hindolam is repeated as background score every time Chiranjeevi is shown in any stunt or action in the film.

The film has many positive features that made it a huge success. Satyanarayana, Allu Ramalingaiah and Velu made the perfect trio of Yama - Chitragupta - Vichitragupta. Not only the timing of their dialogues matched but also the emotions and expressions were perfect. Normally a film has one or two major villains. However in this three actors who made their name big as villains are included - Rao Gopala Rao, Gollapudi Maruthi Rao and Kota Srinivasa Rao. To keep all four balanced in their roles is a feat that the director achieved it well. Neither characters were portrayed less nor more.

As for the lead actresses - Radha and Vijayashanti - both ruling the Telugu film industry then - complemented to each other rather than being opponents and creating a chaos in the middle. Then the trio of villainesses / mothers - Suryakantam - Annapurna - Y. Viajaya - who better but these could portray these roles.

To top it the plot includes the mythological piece - after-life concept, going to hell or heaven - something every human being want to see what looks like. The director gave a glimpse of it to the viewer - albeit in a humorous way - capturing the viewer's attention immediately. Not to discount the comic reliefs inserted timely by Sudhakar and Prasad Babu.

A thoroughly entertaining feature film with a tinge of mythology, a dose of ethics, a dash of stunts and a lot more punch of fun in it.