Stars:  5 / 5
Recommendation: A beautiful animated film that every young girl, in fact anyone, should watch to learn about perseverance, confidence and survival at the same time sticking true to their self.

My friend Shraddha had mentioned in one her posts that she was a fan of Studio Ghibli. At first I wasn’t sure whom she was talking about. She encouraged me to watch one of the movies from this Japanese Animation Film Studio and then decide if I would like them too. So, when I looked up for their movies, guess what I found - Kiki's Delivery Service. I have watched this movie numerous times and loved it a little more every time I see it. And I never knew it was made by Studio Ghibli. Surprise, Surprise, Surprise - I do like Studio Ghibli movies. Thanks Shraddha for reconnecting me to this gem of a film.

Kiki's Delivery Service is a 1989 Japanese animated fantasy film produced by Studio Ghibli. It is an adaptation of the 1989 novel of the same name by Eiko Kodono. However, the English dub version of this movie was released in 1997 in United States that included a partnership between Studio Ghibli and The Walt Disney Company. The film is about Kiki, a young witch, who uses her flying abilities to earn a living. The movie symbolizes the independence amongst young Japanese teen girls. The movie won every award it was nominated for - a feat that very few films achieve leave alone animated movies. 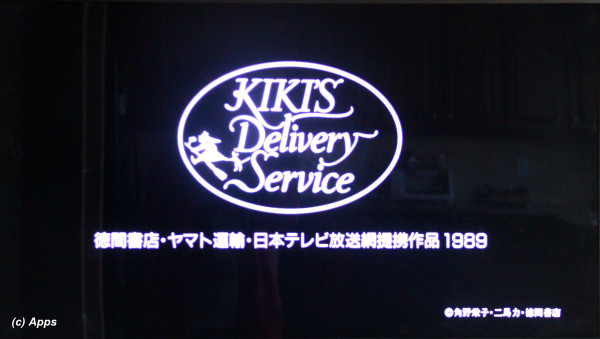 Kiki, a 13 year old witch, along with her cat, Jiji, moves out of her parent's home to live in the world for a year to be trained as a good witch as per the witches custom. She reaches a town by the ocean just like she dreamed of, gets a job at a bakery to deliver the goods and help out at the place, gets boarding with the same bakery owner and settles into the town for the year. Although Jiji doesn’t appreciate the town or people, she decides to stay. As her year progresses, Kiki learns to live, build up her delivery service, make friends, finds love and friendship in Tombo and eventually find herself as a witch.

The film depicts various strong personalities and characters of Kiki all through it. Transforming from a child to a teenaged-adult, braving the problems she faces as an independent adolescent living away from the shelter of her parents. Kiki also balances both traditional and contemporary very well in her appearance and nature. She wears the traditional witch outfit yet adorns it with bright red ribbon, and cooks in a wood-burning stove. In her journey to become a witch, she also learns that not all humans treat you equal - she faces taunting from Tombo's friends and shies away from Tombo because of it, yet eventually she warms back to him again. Her experience with such kind of people makes her depressed leading her to lose her ability to fly or understand and talk to Jiji. Her self-doubts and loss in her confidence is overcome with a helping hand. She comes out as a brave, confident and a self-independent witch in the end.

Some of the very famous actors have provided voices to characters in this movie in the English version - Kristen Dunst for Kiki, Phil Hartman for Jiji, Matthew Lawrence for Tombo, Debbie Reynolds for Madame. There are very few scenes in the movie that can be removed and wouldn’t have made any difference but they didn’t harm either. Every aspect in the plot is complete and clean.

A beautiful animated film that every young girl, in fact anyone, should watch to learn about perseverance, confidence and survival at the same time sticking true to their self. A movie that I love to watch any time of the day or night and it just blooms my entire self.

1) The movie was released as Witch's Delivery Service in Japanese.
Collapse