Indiana Jones and the Last Crusade is a 1989 American action-adventure film directed by Steven Spielberg. This is the third film of the four movies produced under the Indiana Jones film franchise, albeit this forms the sequel to the first movie Raiders of the Lost Ark that was released in 1981. Sean Connery plays Indiana's father - Henry Jones Sr. - in this movie. The plot revolves around Indiana Jones trying to rescue his father Henry Jones Sr. from the clutches of Nazis who are looking for a Holy Grail that his father has been researching on. Beginning of the plot is set in 1912 with a young Indiana Jones and the rest of the plot is set in 1938 - two years after the first movie was set in. The plot opens with a teenager Indiana Jones doing horseback riding with his Boy Scout troop in Arches National Park, Utah in 1912. He comes across some diggers who find a golden crucifix belonging to Coronado. He steals it and takes it back to his town to give it to his Sherriff traveling through a Circus Train. But the Sherriff hands over the crucifix to the owner who had commanded the dig. However that experience gives Jones his fascination to bullwhips, scar underneath his chin, aversion to snakes and also a fedora from the diggers leader who encourages him to continue the adventures.

The movie fast forwards to 1938 where Indiana Jones is taking the crucifix again back from that person and barely escaping with it. Back at home, is approached by Walter Donovan - an American businessman - to search for the Holy Grail, the expedition that his father Henry Jones Sr. was leading but has disappeared now. In the meanwhile Indiana receives a journal from his father with all his research about Holy Grail - which leads Indiana to think that his father was in danger else he would not have parted with it. Indy agrees to Walter's proposal and taking Marcus and the half tablet that had inscription of the whereabouts of the Holy Grail with him he travels to Venice. There he meets with Dr. Elsa Schneider. Together they go into the catacombs under the library and discover the tomb of a First Crusade knight, which also contains a complete version of the inscription revealing the location of the Grail. However the Brotherhood of the Cruciform Sword, a secret society that protects the Grail from evildoers, set the catacombs on fire. Indy and Elsa barely escape the fire. Thus the adventure to find his father and the Holy Grail.

During this adventure, Indiana Jones encounters his share of trials and troubles some by his enemies and some by his allies, and also faces some historical moments - Kazim (one of the member of the Brotherhood of the Cruciform Sword who helps him in the search for his father), Sallah (his old friend who had helped him in Cairo in the first movie), be part of the book burning rally by the Nazis to save the diary, accidentally meets Adolf Hitler and gets his signature on his dad's journal,

ride aboard a Zeppelin, escape a dogfight with the Luffwaffe (aerial warfare of Germany), Sultan of Hatay (who allow the Nazis free reign in his area in exchange for a Rolls Royce Phantom II), SS Colonel Ernst Vovel (working for Nazis).

Interestingly enough Sean Connery is shown briefly as a partial profile in the beginning of the film, then as a snapshot photograph a little while after. 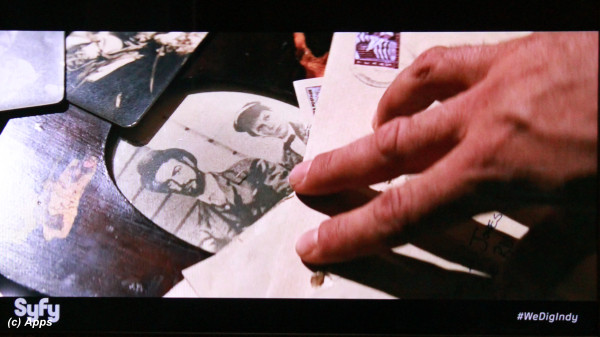 However he doesn’t really come on screen until at least an hour into the film. 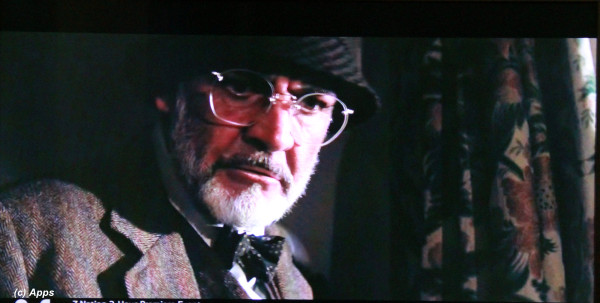 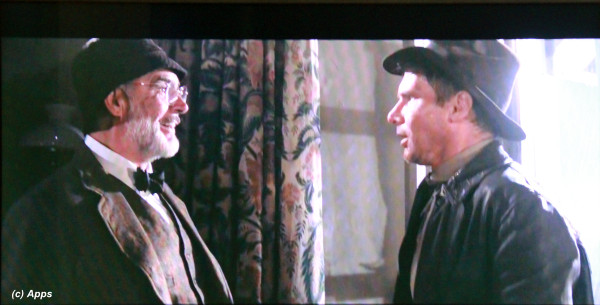 And this movie does not have a love interest for Indy - albeit Elsa manages to seduce him briefly. This makes a lot sense when one sees the fourth episode of this franchise where Indy gets reunited with his love / wife Marion Ravenwood. It was pretty funny to see the goofy side of Sean Connery after seeing the tough side as a James Bond.

1) Denholm Elliot reprises the role of Dr. Marcus Brody - Indiana's colleague - similar to what he was in the first film Raiders of the Lost Ark.

2) River Phoenix - older brother of  Rain Phoenix, Joaquin Phoenix, Liberty Phoenix and Summer Phoenix - plays the role of young Indiana Jones. He also portrayed the son of Harrison Ford in the 1986 film The Mosquito Cast. Sad that he died at a very young age of 23 with drug overdose. Fame and fortune at a young age always brings bad company closer unless you are smart and have good help around. Nonetheless another movie that I have for a future blog post.