Stars:  3.5 / 5
Recommendation: It's easy to be in a relationship but very hard to keep it together. What happens when one waivers and how it impacts several lives is beautifully depicted in the musical romantic drama that gives you tons of tears, hoards of laughter and kick in your gut.

Last year when my parents were here, one day I come home and find my mom watching this movie. I could not resist to sit and watch with her, mainly because it has all the big faces in Hindi film world that I admire either for their acting or charm. However beyond that it was much pleasure to watch with my mom and hear her opinions on the movie. It had been a while we had that debate and conversation while watching a movie. Moments that I would cherish forever.

Kabhi Alvida Naa Kehna ( = Never Say Good Bye), is a 2006 Hindi (Indian Language) musical romantic drama loosely based on the 2004 American film Closer. The basic plot revolves around the theme of adultery and extra-marital affairs which actually did not sit well with a lot of Indian audience. Despite that the film gained success - especially overseas, a good many awards and nominations and an entry the be included in the library of the Academy of Motion Picture Arts and Sciences. Directed by Karan Johar and produced under Dharma Productions banner, the movie had very good music as expected. 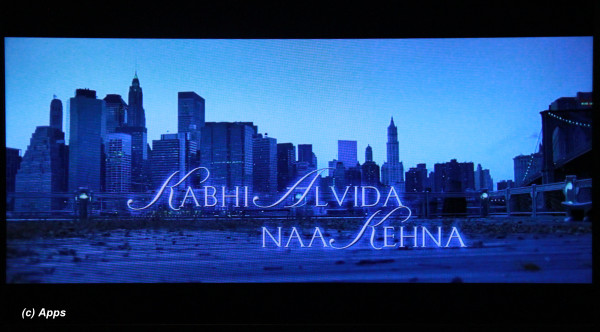 The plot is set in New York city mostly but we see glimpses of East Hartford and New Haven in Connecticut. Now that I live here it was a pleasure to see the familiar places. It stars Shah Rukh Khan, Abhishek Bachchan, Rani Mukherji and Preity Zinta in the primary roles with Amitabh Bachchan and Kirron Kher in critical supporting roles. Arjun Rampal and John Abraham have special appearances along with Karan Johar and Kajol. 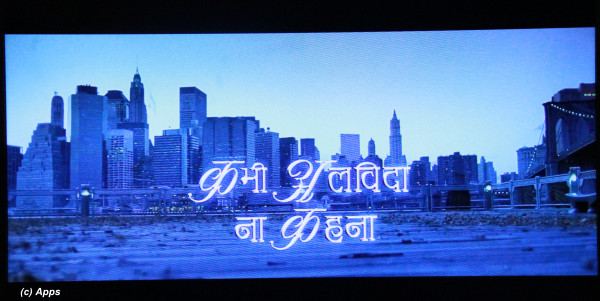 The movie was promoted with a tag line tag-line, "A Love.... That Broke All Relationships". Incidentally the movie ends with a similar line by Shah Rukh Khan:

But I am getting way ahead in my review. First the basic plot.

The introduction of the four characters sets them in the plot so perfectly without even showing their faces. Brilliant approach giving the viewers a feel of what they will see about them in the next 22 reels of the movie. 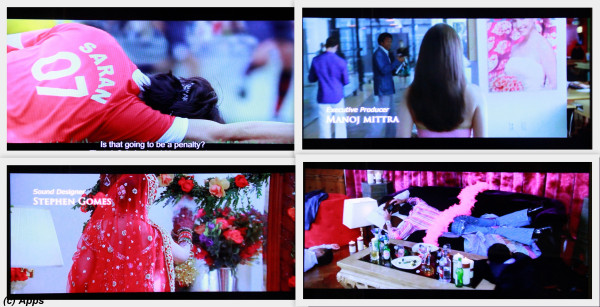 The plot revolves around Dev Saran (portrayed by Shah Rukh Khan) - a bitter and selfish husband as he cannot play soccer anymore, resents his wife's career and be the man of the house he want to be, Rhea Saran (portrayed by Preity Zinta) - married to Dev, bread-winner of the family with a very successful career, Rishi Talwar (portrayed Abhishek Bachchan) - totally in love with his wife with a happy-lucky-go attitude without caring for the serious matters, and Maya Talwar (portrayed by Rani Mukherji) - married to Rishi, her childhood friend, but feels he is selfish, has no satisfaction in her marriage life and also finds out that she is infertile. Rishi's father Samarjeet "Sam" Talwar (portrayed by Amitabh Bachchan) and Dev's mom Kamaljeet "Kamal" Saran (portrayed by Kirron Kher) form the elderly heads in the two families that see the marriages for their sons failing gradually.

Dev meets Maya first on the day she is getting married to Rishi - her childhood friend. When she is on the edge of her decision to go for the wedding or not, a timely talk with Dev makes her take the step. Shortly after Dev meets with an accident and loses his successful soccer career. Four years later, Dev and Maya meet again accidentally - literally - and realize that they both are in unhappy marriages. Dev is bitter because he cannot have a soccer career and resents his wife Rhea's successful career as a fashion magazine editor. While Maya knowing she is infertile is unhappy and feels Rishi as a very selfish and spoiled brat. Dev and Maya get closer as friends at first and gradually fall for each other even though they are married to others. While Sam and Kamal seeing the failed marriages introduce Rhea and Rishi together so they each can teach each other on how to better their marriages. Rhea and Rishi realize that they have to take a step back and reach out to their partners with love. But Dev and Maya secretly start their affair. The rest of the plot continues on how the affair comes out, how it blows up on both the families, how it tears everyone and who pays in the end. A love, that certainly breaks all relationships and costs lives in the mix.

Dev and Maya are two bitter and selfish characters who fail to see what they have in their life and instead search outside. They know they are the cause for the unhappiness in their lives but instead of admitting they blame it on their partners. While Rhea and Rishi are so surrounded by themselves that they forget that the world does not revolve around them. They may be truly in love with their partners but they fail to realize the need of their partners. No person comes perfect and faults are the wrinkles that fold seamlessly between two partners to make a successful life. Yet these four players make decisions and take chances in the name of love that cost them gravely.

Music composed by Shankar-Ehsaan-Loy and Lyrics penned by Javed Akhtar have left a lasting impact in our minds and memories. Even today these songs spring me to a quick dance or I hum along whenever I hear them. It’s a mix of ballad (Tumhi Dekho Na), 60's rock n roll (Rock N Roll Soniye), sufi rock (Mitwa), soft tear-jerker (Kabhi Alvida Naa Kehna title song) and club song (Where's The Party Tonight?). Farewell Trance is the trance version - a form of electronic dance music from Germany - of the title track. (Credits: Wiki)

Well-made plot with good actors and very good music but comes with a lengthier plot giving some real tears at times and angry taunts at other times. It left me definitely drained at the end, but I still loved it despite what everyone had opined about it. I would however have liked to see a few reels less though.
( Collapse )
Collapse