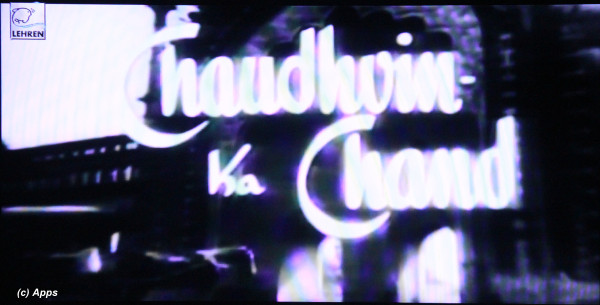 While visiting my brother in CA this July, one afternoon this movie was playing on a local Indian channel and I couldn’t resist to watch this completely. Truly speaking I have never watched this movie until now, although have seen the videos of all of the songs from the movie and had hummed them countless number of times. It was a feast to all of my senses watching this movie.

The plot opens with Nawab (portrayed by Rehman) chancing upon seeing Jameela (Waheeda Reehman) at a local fair and falls in love with her instantly. However his attempts to find who she was fail, to his utmost desperation. In the meanwhile his mother gets his wedding arranged with the daughter of their Mawlawi ( = religious scholar and priest). To avoid that wedding Nawab arranges to get Jameela to be married to his dearest friend Aslam (portrayed by Guru Dutt), not knowing that Jameela is the same girl that he had fallen in love with. One day Nawab sees Jameela at Aslam's home and thinks she is his relative. But upon telling Aslam, Aslam realizes that Jameela was the girl whom Nawab was in love with. Now rest of the tale deals with how Aslam lives with the knowing the truth, indebted to Nawab forever from his childhood what will he do, what will Nawab do still ignorant of Jameela being Aslam's wife, what will be the conclusion when Nawab finally finds the truth.

The movie is filled with comic relief in the form of Mirza (portrayed by Johnny Walker) - friends with Aslam and Nawab - and Naseeban (portrayed by Tun Tun). Guru Dutt doesn’t appear in the film until 25 mins into the movie. Being the lead I wondered about that as to why he did so. But, it worked its charm making another point to make the movie a classic.

The movie is set in the city of Lucknow in Uttar Pradesh state in India and depicting the Islamic culture of those times. One of the three different regions where Urdu is well-versed and spoken are Delhi, Lucknow and Hyderabad. All three dialects of Urdu are so different and each has its sweetness. Growing up in Hyderabad I have heard that version of Urdu so many times and loved it. However, there is sweetness in the Lucknowi Urdu that touches deep into your heart.

There some really beautiful melodies in the movie composed by the Ravi (when S.D. Burman refused to compose anymore songs for Guru Dutt, he went with Ravi) and songs penned by Shakeel Badayuni. But the iconic song is the title song Chaudhvin Ka Chand Sung by Mohammed Rafi. I had posted about that song a while ago. Check my review about it here. However, this song has gone to become a classic and iconic song for all romantic hearts to date. In the original movie however this track is in color while the rest of the movie is in black and white.

A beautifully made romantic movie with in-depth insight into relationships between friends, husband and wife and ultimately about the ethics of basic human feeling of love. A classic that can be watched again and again. Do watch it if you haven't it yet.

1) Tun Tun is credited as Uma Devi in this movie, her given name. Later on she had been dubbed as Tun Tun because of her role in one of the films as Tun Tun.
2) There is a classical Mujhra in the movie titled Bedardi Mere Sayyan, Shabnam Hain Kabhi Sholay which didn’t make any sense as to why it was in the movie other than to depict the culture of Mujhra and Khote ( = Dancing Houses close to Prostitution but without skin trade). Or to connect to the second half of the movie where Guru Dutt also visits such a place. However, without this song also the later scene would have still made sense.

3) The opening credits has a background song that describes Lucknow in Uttar Pradesh, India. A beautiful composition not only taking you through the lanes of Lucknow but also through the people.