After the success of the novelization of Agatha Christie's first play Black Coffee, Charles Osborne made another one of her play into a novel. The play Unexpected Guest was originally opened in 1958 and written by Agatha Christie. Charles Osborne's novelization was published in 1999. It's a straight forward novelization of the play line by line without any additions by Charles - keeping the Christie magic as is. This, however, is not your typical Miss Marple or a Poirot mystery, yet a mystery none the less right out of Christie's pen to the paper. 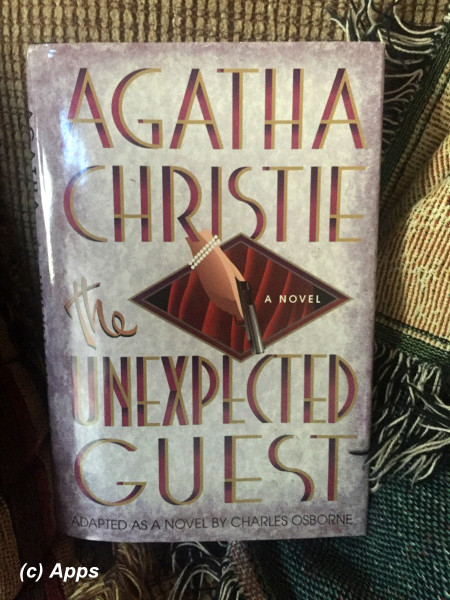 "The door opens and the unexpected guest comes in." - The exact saying that Laura Warwick had heard growing up and the word "unexpected guest" always chilled her. And the very night that she supposedly had shot her husband - Richard Warwick - in walks Michael Starkwedder through the French Windows of The Study, whose car gets stuck in a ditch right in front the Warwick's home. The household of Warwick's consisted of Richard and Laura Warwick, Henry Angell - Richard's valet and male nurse attendant, Richard's mother, Miss Bennet "Benny" - housekeeper, secretary and ex-hospital nurse; and finally Jan - Richard's sort of retarded half-brother. Per what Laura had told Michael, he came to a conclusion that Richard was one of the most bitter and sadistic person. For that very reason he feels a soft spot for Laura. And instead of calling for the cops, he talks her into trying to make this murder look like done by someone from Richard's distant past who had a grudge against him. Laura agrees to go along with him, for she would be better of being acquitted than convicted.

Putting his idea into motion, Michael walks away from the house while the household wakeup to a shot, find Richard's dead body, re-enter Michael again and finally call the police. Inspector Thomas and Sergeant Cadwallader are assigned to the case - a curious one that they have had in a while. Sergeant Cadwallader has his suspicions on Michael Starkwedder but Inspector Thomas thinks of other avenues in solving the case. Who actually murdered Richard Warwick? Why did Michael decide to fabricate evidence and save Laura? Why did Michael come into the house in the first place? How did he happen to be driving his car into a ditch at the same time the murder was being committed? How are the other members of the household involved - for none seem to have any love towards Richard?

As the plot proceeds, everyone  comes under suspicion and is considered as a suspect - for everyone had a motive to kill Richard. A seemingly knotty case for the Inspector and Sergeant to solve until the last the knot frees up and the murderer is revealed. A mystery typical of all the Agatha Christie elements seen but has a few flaws. Obviously the chase and thrill are missing. However, there are periods of conversations that are so lengthy adding more lines to the characters but doing nothing. All in all another quick read from Agatha Christie novelized by Charles Osborne.

Spoiler Alerts:
1. Per Wiki: The Guardian - a British newspaper (More about it here) - reported that The Queen attended a performance of the play on the evening of 16 February 1959 with Lord and Lady Mountbatten. The cast were unaware that she was in the audience.
2. The play has been made into several Indian movies in many of its languages:
a. In Hindi made as Dhund ( = Fog) in 1973
b. In Kannada made as Tarka ( = Logic) in 1988
c. In Tamil made as Puriyadha Puthir in 1990
3. Sergeant Cadwallader quotes famous poets all through the book - Keats, T. S. Elliot, John Masefield, Shakespeare, Alexander Pope.
4. The person that Laura and Michael plan on throwing suspicion on is MacGregor. Reminded me of the several novels Nora Roberts had written on the MacGregor clan.
Collapse