Stars: 5 / 5
Recommendation: An absolutely delightful film that made the book come alive and real. 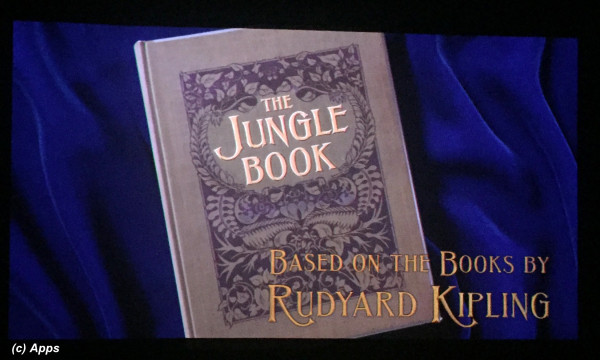 The movie introduced Neel Sethi as the famous Mowgli and features other famous actors in pivotal roles - Bill Murray as Baloo, Ben Kinglsey as Bagheera, Idris Elba as Shere Khan, Scarlett Johansson as Kaa and Christopher Walken as King Louie (a Gigantopithecus) among others.

The movie plot is well known - a man-cub, Mowgli, brought up by an Indian wolf and her pack is the target of the evil Shere Khan's eye (well, his scarred eye across his face); who decides to leave the pack to avoid a conflict and war; in search of his man-village where he assumes he can be safe from Shere Khan meets some great friends and some unavoidable foes and finally comes back to the pack to face his biggest fear to come out on top.
The CGI effects for this animated movie are beyond compare and very impressive. Although the plot covers only the first three chapters of the original book, it makes up for a complete story. However the plot in this version has lot of differences to the 1967 animated movie as well as to the book. Perhaps leaving it to viewers mind on the concept of a sequel - which seems to be a common thing with movie makers now-a-days. Compared to the 1967 movie, this movie however retained the dark undertones from the book - cruelty of Shere Khan when he swipes at Akela (leader of the wolf pack that raised Mowgli), without a thought and kills him, the subtle rashness in the King Louie who insists Mowgli on getting the "red flower", the hidden cunningness in the python Kaa.

Neel Sethi lived the part as Mowgli. For a child actor debuting in a movie, he has showed immense professionalism in his acting and yet keeping his child-like nature for the role as well as for himself. Him being the only human character in the entire movie, it must have been a tough ride for Neel Sethi to act. However, he made it look like a piece of cake. Kudos the young boy's acting capabilities. I would love to see him in more movies in future and hopefully not fade away like Dev Patel and other Indian-origin actors who act in American and British movies.
( Collapse )
Collapse