Stars: 3.5 / 5
Recommendation: A good book on the side-line with characters from the main book, easy and quick read.

Patrick Rothfuss has published two books so far in The Kingkiller Chronicle series - The Name of The Wind (My review here) and The Wise Man's Fear (My review here) - and I have been waiting for his third and final book, The Doors of Stone to be out. Unfortunately Day 3 in the life of Kvothe is yet to come to light. In the meanwhile he has written three novellas featuring things and people from the Kingkiller Chronicle's world and set during the time periods explored in the two books of the series.

The Slow Regard of Silent Things is the third short novella focusing on the character Auri who lives in the Underthing - a hidden location of old rooms and tunnels under the University - published in October of 2014 in UK and November of 2015 in USA. According to Wiki entry the books covers specifically the time period that was covered between chapters seven and eleven of the second book The Wise Man's Fear. After much waiting on my part to open and read the book, I finally finished it. 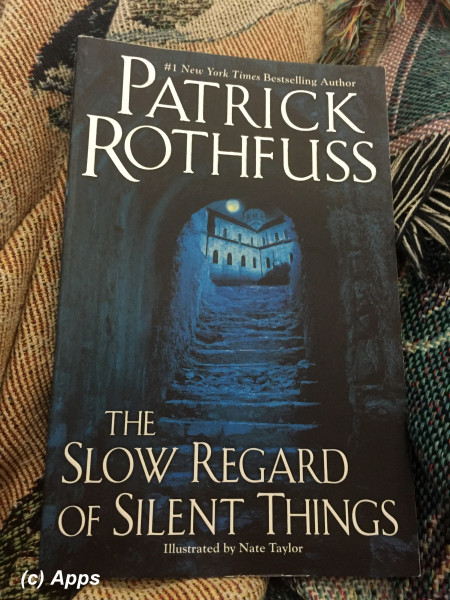 However, just like the author has warned in his foreward, if you haven't read his first two books in The Kingkiller Chronicle series, then this is not the book to start with and would be a total confusion for you. I urge you to read the other two books before picking this or any of his novellas related to this series. 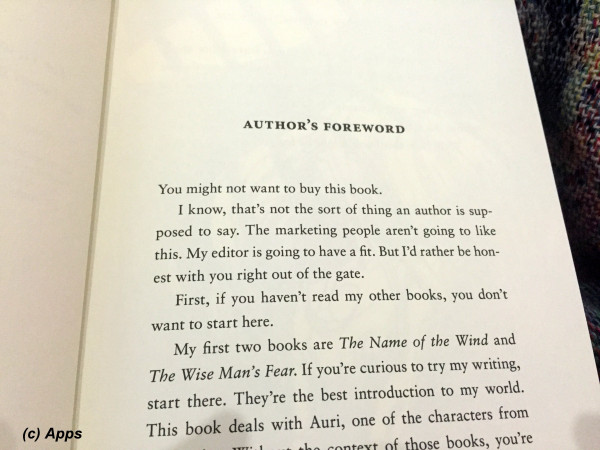 The writing style of the author is very old world almost from some other century far far away. He humanized every single thing even the inanimate ones as though they had life and would speak. So does Auri - the central character of this book - treats her things around like humans, like her family. She has a finding day for finding them. She uses the tunnels and the rooms around as though she owned them - perhaps she did since she is the only one living there. She liked to do things the proper way. And she liked things to be in their proper place just like she was. She has seven days before "he" comes for a visit and she needed to find something for him by then. The second day was turning day - to do something while the Third day she cried. Fourth day was tapering day - a burning day. Fifth Day didn’t have a name so Auri set on to do the preparation for "him". Sixth Day was the wazing day - a day of making.

Author has used very interesting names to the rooms - Mantle (the area where Auri lives), Port, maze of Rubric, The Twelve (one of the rare changing places of the Underthing), The Yellow Twelve, Withy, Darkhouse (a very dark area where light doesn’t seep into much), Clinks (area where the tink of glass could be heard), Vaults, Tenners, Dunnings, Bakers, Borough, Black Door (Auri didn’t like this on a white day), Wains, Throughbottom, Greely (area is filled with sulfurant smell), Crumbledon (a narrow dirt tunnel that is not more than a hole), Tumbrel (Place that was half fallen and half full), Delving, Woods, Van, Cricklet (a small trickle of stream of drinking water), Tree (the tree that Auri used as her kitchen), Applecourt (Where Auri met "him"), Umbrel, The Grey Twelve, Mandril, Candlebear, Tenance, Billows, Pickering, Scaperling, Mote (An area with pool of clear water), Grimsby, Oars, Trip Beneath, The Black Twelve, Emberling, The Silver Twelve, Old Ironways, Winoway, Draughting, Annulet, Taps (place where there are faucets with fresh water), Boundary (A place that is similar to a lab), Veneret, Doubton, Forth, Lucient, Annulet, Lynne (a place full of pipes), Ninewise and Tocks.

She has a companion whom she calls Foxen, living in her Mantle and provides light to her when she wanted. Auri seems to know all about Alchemy and Chemistry and with efficiency and knowledge that only learned scholars could achieve with age and experience. How did she acquire all this knowledge? How old is she really? How long has she been living in the Underthing.

A very interesting style of writing by the author that gives life to all the mute and inanimate things making us feel the existence of so many characters when in reality the whole book has only one person in it - Auri. There is a lengthy description of how to make a candle which might have been a boring episode. However we are so engrossed in Auri by then that we literally make the candle in our minds. So it doesn’t become boring at all.

Frankly speaking it took me a while before I finally ventured on to read this book even though I had bought it a long time ago. I was sure I would be bored to death. However since I loved the main books for this novella, I braved myself to read it. To my surprise the book hooked me on to it so quickly that I couldn’t keep it down. I was constantly thinking will Auri complete what she had figured out to do for that day? What will she find when she would go into one those rooms in the Underthing? How does she live all by herself and all alone there? All these questions made me want to go back to the book immediately. Believe me, I had finished it much faster than I had anticipated.

Give it a try if you come across this book. And if you are anyone like me, trust me, you will not be disappointed.

PS: Now that I have read this I am looking forward to read two of his other novellas that he has written in a similar way - tying back to the main books.

Spoiler Alerts:
1. The Yellow Twelve - Mentioned in the book several times, I could not figure out what it was. A huge Trunk? A armoire? A dressing room?
2. Withy - Another mysterious area in Underthing that I could not place my finger on.
3. Temerant - Auri calls the world as Temerant. Perhaps that is where this plot occurs, a different world called Temerant.
4. The words are so unique that I have not come across in any book before, even his two other books - Minnow-quick (meaning very fast per the usage in the sentence: Pg 12), in nothing but her pinkness (to describe nude or naked: Pg 21), white day (to describe a bright and happy day: Pg 25), frescoes (paintings: Pg 26), higgledy-piggledy (perhaps to mean scattered in a disarray: Pg 31), triptych (a picture or relief carving on three panels: Pg 32), tenebrific (meaning darkness: Pg 80), gooseprickle (couldn’t find the meaning for this: Pg 107), cricket-quick (perhaps meaning as quick as a cricket? Pg 109), widdershins (counter clock-wise: Pg 117), raveledy (couldn’t find the meaning for this: Pg 131)

For all movies of Sherlock Holmes or related to Sherlock, go here.
Stars: 5 / 5
Recommendation: Need I say that this is a must watch series.

The Abominable Bride is a special episode of British TV Series Sherlock - a series based on Sir Arthur Conan Doyle's Sherlock Holmes books - that was released on Jan 1 2016. It was released in theaters for a very limited period of time. The title is based on the quote "Ricoletti of the club foot and his abominable wife" from The Adventures of the Musgrave Ritual. Sherlock Holmes has been an inspiration, an enigma and a favorite on many book lovers especially those who love murder-mysteries. While Dr. Watson has remained his faithful partner aiding as needed and yet making a mark of himself in the reader's minds. From the time Sir Arthur Conan Doyle created his character, Sherlock Holmes has taken a personification of his own rather than just staying inside the book - so much so that sometimes one forgets that he is just a figment of Sir Doyle's brain. Perhaps Sir Doyle must have felt the same too because he had taken a long hiatus after slaying away Sherlock Holmes and his nemesis Professor Moriarty over the  Reichenbach Falls in the story "The Final Problem" in 1893.  After a lot of pressure from his publishers and demand from the readers, Doyle had finally written the novel The Hound Of Baskervilles in 1901.

A toast to such a great author who created a character that lives out of the books and has crept in everyone's bedrooms and minds charming them with his mind-boggling capabilities to solve the unsolvable. Whenever someone applauds at how Sherlock solves a crime, I always feel that the credit lies solely in Arthur Doyle's hand and mind. How can one imagine so much complexity on paper giving it visual impact of dark-side of humanity in the form of murders, etc. and at the same time keeping the readers gripped with wit and charm. A person within a person within a person - such seems the complexity of Sherlock Holmes.

With the fame of the character comes the passion of the readers to make him alive by re-creating him in theater plays, movies and cinemas; giving him an actual home to live in and an actual life to portray. In years that passed, several actors have portrayed as Sherlock Holmes and Dr. Watson but only few of them have become memorable. One that comes to my mind is Matt Frewer. I know everyone likes Jeremy Brett as the best Sherlock Holmes, but for me Matt Fewer for some reason tops. Until I watched the new Sherlock. Now Benedict Cumberbatch tops all the lists and he is The Sherlock that Doyle would have imagined in every way.

With the episodes period setting being current era and technology they have become all the more interesting. With the inhumanly calculating and addictive personality and not being cold is the essence of Sherlock. Benedict has married all the three qualities into one and has become the 21st century Sherlock Holmes. I have watched every episode of this series since its inception. And love love love it. Here's me sporting the t-shirt of Sherlock to show my love. 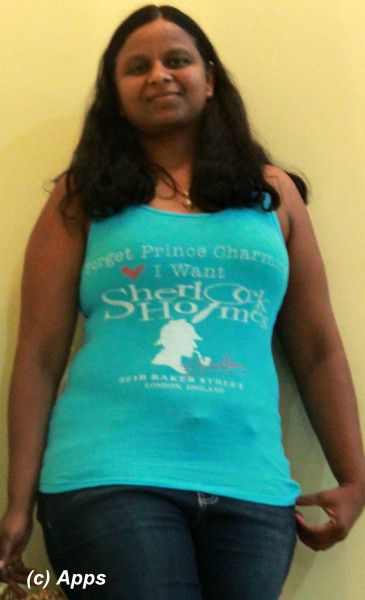 Back to this episode of the series. It is very interesting to see that the episode rolls back to 1890s - the time when Sir Arthur had written about Sherlock - with Holmes meeting Watson for the first time. And moving speedily until the time where Watson is married to Mary and is successfully publishing Holmes adventures in solving murders in The Strand Paper. A unique case of Emelia Ricoletti - a consumptive bride - who had committed suicide keeps coming alive and killing people. Sherlock doesn’t believe in ghosts and very much knows there is a human intervention.

In solving the crime his trusted friend Dr. John Watson and his wife Mrs. Mary Watson come to aid. His brother Mycroft Holmes also aids in his own way. However he gets stumped when all clues lead to Professor Moriarty - the one person who he was sure was dead. Is Moriarty really alive? Is he the cause of the murders? Who really has been doing the killings?

Answering all those questions was at one side of the scale - a scale that balanced with only one on the other side: Why is the series rewinding to the 1890s setting? As always the episode has been produced brilliantly with such unexpected twists and surprising turns that it keeps one glued to the sofa. Another part excellently made and worth every penny if watched in theater.
( Collapse )
Collapse