Stars: 3 / 5
Recommendation: A good movie but can wait to watch it on TV with no qualms of missing it in theater.

X-Men: Apocalypse is a 2016 American super-hero action film based on the X-Men characters from Marvel Comics. This is the ninth installment in the X-Men series and sequel to X-Men: Days of Future Past. The movie is set in 1983 and revolves around a powerful mutant who try to wreak havoc on this world while the X-Men try to save it. 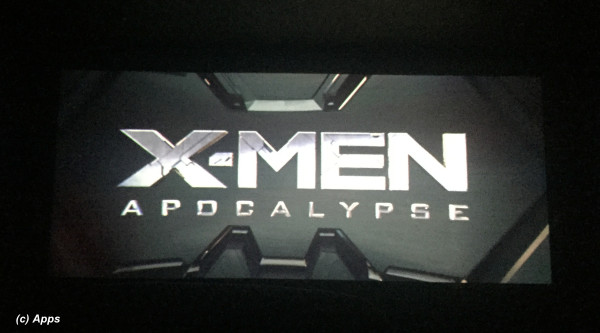 En Sabah Nur, an ancient mutant who had ruled Egypt, awakens after millennia of being entombed by  his betrayers. He always has four lieutenants along his side. With the world being so different from what it was when he had ruled, he sets on to destroy it and remake it. In order to do that he recruits his four lieutenants - Psylocke (with powers of telepath among others), Angel (whose wings he replaces to metal ones) and Ororo Munroe (who can control weather). He comes across Erik Lehnsherr aka Magneto in a raged and ravaged situation after his family gets killed by the militia of Poland. Erik joins En Sabah Nur to turn his grief into revenge without thought. In the meanwhile Xavier is joined by other mutants and plan on fighting the ancient mutant. However En Sabah Nur takes over Xavier's mind when he was using the Cerebro and orders all mutants all over the world to unlock Earth's all nuclear arsenals. The plot continues in how Xavier and his mutants fight En Sabah Nur and save the world eventually.

The movie had begun with a very interesting plot showing us how mutants originated and what was it like in the past. However, as the movie progressed the violence increased one fold by one fold. I was expecting a bit less of destruction in this movie, however, there seemed more than necessary. I always wonder when will the super heroes and the super villains realize how much destruction they leave in the wake of their wars. This was very disturbing for me when I watched the movie. Hopefully the next installment has a better way of portraying the superheroes.

That said, the movie has its good parts too. We get to see the younger X-Men tied in with all the different pieces with their older self from the original X-Men movies. We also get to see some very good graphics. However I would say the show was stolen by the mutant En Sabah Nur portrayed by Oscar Isaac. He has a very powerful presence and bordering on shadowing all the X-Men characters together. X-Men get united in this part again - albeit most part - and that always cheers me when everyone stand up for the greater good.

All in all a good movie, but I would have rather waited to watch on TV than drag myself to the theater for this one.

Spoiler Alerts:
1) Scott with his power to shoot optic beams from his eyes meets Jean Grey (both telekinetic and telepathic) in Professor Charles Xavier's educational institute in Westchester County, New York. Sparks of romance fly between them instantly. This is a prelude to what we see of their love and romance in the original X-Men series.
2) Peter Maximoff aka Quicksilver is shown as the son of Erik / Magneto.
3) Weapon X is released from Colonel William Stryker's military facility - who turns out to be Wolverine. Jean helps restore some of his memories.
4) The original actor to portray Charles Xavier was Sir Patrick Stewart who has been bald for quite a long time. To tie in to that character this movie added a sub-plot that would show the hairy James McAvoy to become a bald one. Very neatly tied that in.
5) Don’t miss the ending as it does give us a insight to the next sequel - perhaps a Wolverine movie again?
Collapse