Stars: 5 / 5
Recommendation: A movie about integrity, redemption and survival - a must watch.
Red: [narrating]:  Andy crawled to freedom through five hundred yards of shit smelling foulness I can't even imagine, or maybe I just don't want to. Five hundred yards... that's the length of five football fields, just shy of half a mile. 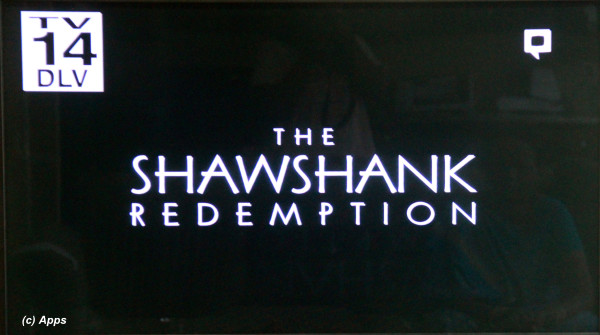 That's the crux of the movie The Shawshank Redemption, a 1994 American film with Tim Robbins and Morgan Freeman in the lead roles. The movie was based on a short story or novella Rita Hayworth and Shawshank Redemption by Stephen King published in 1982 in his collection Different Seasons. The plot revolves around Andy Dufresne, a banker who was sentenced to two life sentences after being convicted of the murders of his wife and her lover. Although it bombed at the box office, the movie was nominated for seven Academy Awards but had not one a single one. Yet, it went to become a successful one  and even getting a #72 position on AFI's 100 Years...100 Movies (10th Anniversary Edition).

The main plot revolves around Andy Dufresne (portrayed by Tim Robbins) and Ellis Boyd "Red" Redding  (portrayed by Morgan Freeman). Andy after being wrongly convicted of the dual murders of his wife and her lover arrives at Shawshank State Penitentiary in 1947. After going through a few hiccups, he befriends Red and works in the prison laundry. He has Red acquire him a rock hammer so he can while away any free time chiseling at small rocks in miniature sculptures. Though he is frequently assaulted by "the sisters" and their leader Bogs Diamond (portrayed by Mark Rolston), he eventually gets help from the guards when he starts helping the guards on their taxes and legally hiding money. Later Warden Samuel Norton (portrayed by Bob Gunton) assigns him to prison library to assist another elderly inmate Brooks Halten (portrayed by James Whitmore) - oldest inmate who was in prison since 1905. But Andy soon realizes why Warden has moved him to the role when he starts helping the Warden in hiding all his laundered money in a legitimate account.
How ironic for Andy as he aptly quotes "Yeah. The funny thing is - on the outside, I was an honest man, straight as an arrow. I had to come to prison to be a crook."

When Brooks gets released on parole in 1954 after serving 50 years in the prison, he fails to get adjusted to the life outside and commits suicide. Andy then resorts to dedicate the prison library on his name after he receives considerable amount of books and recording of The Marriage of Figaro on donation. In 1965, Tommy Williams comes to Shawshank convicted of burglary. Andy takes a shine for him and helps him in passing his GED exam. However a year into his sentence, Tommy reveals that he had overheard one of his inmate in another person had claimed to commit the murders that Andy was sentenced for. When Andy approaches Warden Norton to help him prove his innocence, Warden dismisses him by sentencing him to solitary confinement and has Captain Byron Hadley (Chief Guard portrayed by Clancy Brown) kill Tommy.

Once out of the solitary confinement Andy makes a decision that he has had enough of his prison life and having no scope of proving his innocence, one night escapes the prison through the secret tunnel he had dug over the 19 years of his time in prison. Much to shock of the Warden, the prison guards and prisoners, Andy gets out safe and depicting himself as Randall Stephens - the figment of imagination that was holding all of Warden's laundered money - and crosses the Atlantic into Mexico. Soon after when Red gets released, follows Andy per his instructions that he had left with him before he escaped, and joins him.

The story shows that no matter what life throws at you integrity is what holds you up, and that you find freedom even bound within walls, and finally about redemption. The plot also shows love and affection between two men who have been thrown together in the worst of the prisons. Tim Robbins and Morgan Freeman were the perfect people to be casted for their roles - I don’t think anyone else would have justified them. The movie comes with some powerful quotes that reflect in one's life at one time or another. Excellent screenplay by Frank Darabont. Who can forget these haunting ones:

Andy Dufresne: [in a letter to Red] Dear Red. If you're reading this, you've gotten out. And if you've come this far, maybe you're willing to come a little further. You remember the name of the town, don't you?
Red: Zihuatanejo.
Andy Dufresne: I could use a good man to help me get my project on wheels. I'll keep an eye out for you and the chessboard ready. Remember, Red, hope is a good thing, maybe the best of things, and no good thing ever dies. I will be hoping that this letter finds you, and finds you well. Your friend. Andy.

Andy Dufresne: Get busy living, or get busy dying.

Red: Let me tell you something my friend. Hope is a dangerous thing. Hope can drive a man insane.

And these funny ones:

Red [narrating]:
I remember thinking it would take a man six hundred years to tunnel through the wall with it. Old Andy did it in less than twenty. Oh, Andy loved geology. I imagine it appealed to his meticulous nature. An ice age here, million years of mountain building there. Geology is the study of pressure and time. That's all it takes really, pressure, and time.

The film is set in Maine, but the movie makers used Ohio State Reformatory in Mansfield, Ohio for Shawshank Prison. The scene where Andy approaches Red about the rock hammer took nine hours to picture and Morgan Freeman had played ball for all that nine hours without a complaint.

Although the movie is dark and depressing at most parts, Andy always shined because of his hope. The brighter scenes in the movie are:

One where all the prisoners drinking beer after they have tarred the roof - the beer that Andy secures for his fellow co-workers risking him being thrown off the roof by Captain Hadley.

Another scene is the one in which Andy plays the recording - featuring the soprano "Letter Duet" ("Canzonetta sull'aria") from Mozart's The Marriage of Figaro, also known in Italian as "Sull'aria...che soave zeffiretto." - that he receives as donation for his letters for books, despite the objections from the guard and gets solitary confinement. A very chilling scene to which Red remarks in his voice-over narration:

I have no idea to this day what those two Italian ladies were singing about. Truth is, I don't want to know. Some things are best left unsaid. I'd like to think they were singing about something so beautiful, it can't be expressed in words, and makes your heart ache because of it. I tell you, those voices soared higher and farther than anybody in a gray place dares to dream. It was like some beautiful bird flapped into our drab little cage and made those walls dissolve away, and for the briefest of moments, every last man in Shawshank felt free.

Such a dark movie must have left a lot of impact on the people who were part of it when it had left a huge mark on all the people who watched it. Even Nelson Mandela had commented that he had connected to the movie and loved it.  The movie had no female characters in it except for the scene that is shown on Prison TV of the movie 1946 Gilda portrayed by Rita Hayworth - perhaps that's why Stephen King mentioned her name in the title - the three posters that Andy had pinned to his wall during his 19 years in the cell - Rita Hayworth, Marilyn Monroe (from her 1955 movie The Seven Year Hitch) and Raquel Welch (poster from her 1966 film  One Million Years B.C. movie) - one woman at the grocery store complaining about Brooks inability to pack groceries and finally the bank clerk who helps Andy Dufresne aka Randall Stephens in settling his accounts.

A powerful movie that leaves every one with a ache in the heart and tear in the eye - no matter how hardened one is. One of my all-time favorite movies that I frequently watch.
( Collapse )
Collapse