I watched Killer Hair when it aired in 2009 on Lifetime Movie Network before I ended up reading the book and eventually the series. What attracted me to the series was the portrayal of Lacey Smithsonian by Maggie Lawson, her passion towards becoming a fashion stylist on a grander scale and her Aunt Mimi's magical bottomless trunk, filled with fabulous vintage clothes, fabrics, patterns and fashion memorabilia. This also pushed my interest into vintage clothing and fashion although I havent actually wore anything close. Here's my take on the first book in the Crime of Fashion series by Ellen Byerrum published in 2003. 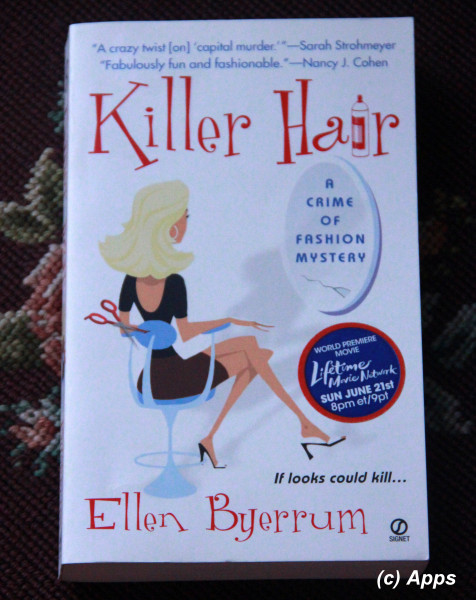 Lacey Smithsonian works as a fashion reporter in Washington, D.C. - a city she keeps calling as "The City Fashion Forgot". She is best friends with Stella Lake - who runs her own hair salon that is catered by the rich and famous living in D. C. - and Brooke Barton - an attorney. The case ruled out as a suicide by the cops falls into Lacey's lap when her friend Stella insists that the dead woman was murdered. Angie Woods, a hairstylist famed for difficult rejuvenating hair-jobs, is found dead with cut wrists and bad hair. Upon insistence from Stella, Lacey performs her own investigation into the crime which she considers a crime of fashion for Angie would never have been found dead with bad hair in case she had indeed committed suicide.

The lead investigator on the case is Vic Donovan - her ex-love interest from her life in a small town called Sagebrush in Colorado - with she has to work much to her heart's discomfort. And Vic has every intention of bringing her back into his life despite Lacey rejecting his advances. Added to these are the staff at the paper she works for - Douglas MacArthur "Mac" Jones, her editor; Felicity Pickles, reporter for food blogs and posts and Tony Trujillo; her rival reporter - that continuously weave strings of web around her that sometimes makes her feel that she is being held from reaching more. Yet, she would not want to have anyone else as her colleagues. The plot continues with Lacey investigation the murder - or as Vic calls hindering his investigation - and trying to find if Angie Woods was indeed murdered and if she was then who killed her? And for what purpose?

The movie enchanted me a lot, but the book was a slow read. In fact I had pushed myself to read through it just because I had already watched the movie and wanted to see how it was on paper (which is my principle - always read the book that had made onto screen). Once the book reached Aunt Mimi's trunk that is when it captured me - hook, line and sinker. Also the little tips and fashion bites that Lacey keeps leaving as the plot moves along added more charm.

An easy read considering it being  a murder-mystery that you want to pick up on days that keep you stressed or down. If you are not yet convinced, here is a fashion tip by Lacey from this book that should definitely move your hand towards it.

Lacey's Fashion Bite of the Day:

Never wear pink to testify before the Special Prosecutor! Accused of high crimes?
Dress in high style! Not like a little Bo Peep who has lost not only her sheep, but her wits as well.
It screams manipulation, not sophistication. Get a new consultant. Get a clue.
And plead guilty to a Crime of Fashion.

Designer Knockoff is the second installment in the Crime of Fashion Series by Ellen Byerrum published in August of 2004. Like I mentioned in my previous post about Killer Hair, the movies Killer Hair and Hostile Makeover on Lifetime Movie Channel based of the books of the same name spurred the interest in me to read the series. They are easy to read murder-mystery stories with a twist related to fashion, vintage clothing and style. Although at times I did get lost in the test, but the plot is interesting enough to be captured again. Lacey Smithsonian - the heroine of the series - works for the paper The Eye Street Observer as a fashion reporter in Washington, D.C. - a city she keeps calling as "The City Fashion Forgot".  In this particular book, she is all geared up to attend the Senate Appropriations Subcommittee oversight hearing on a new museum (by House of Bentley owned by Hugh Bentley) dedicated to American fashion, in her 1940s outfit - a Bentley creation by Hugh Bentley himself from his very first collection. It is from her Aunt Mimi's bottomless trunk, that is filled with fabulous vintage clothes, fabrics, patterns and fashion memorabilia. But her contact, Esme Fairchild, is no where to be found. Yet by luck or luck of Aunt Mimis's dress she snags an exclusive with Hugh Bentley. She had been itching to meet with him from when she had read about her Aunt Mimi's notes that Huge "That Bastard" Bentley was not only a legendary American designer but also a notorious playboy, a cad, a louse and a heartbreaking fiend. She wondered if Aunt Mimi and Hugh Bentley had a torrid affair. Nonetheless she gets invited to the gala - opening of the museum by the First Lady.

Incidentally an armed robbery at one the Bentley's Boutique on the same day she meets with Hugh Bentley lands in her lap to write on the fashion angle of the crime. And Lacey hates coincidences. So she opens her own investigation on this. Little did she know that she was opening doors to a disappearance from the 1940s as well. Yes, Gloria Adams - seemed to be a friend of Aunt Mimi - had mysteriously disappeared and was an employee of Hugh Bentley at that time.  Is there a connection with Hugh and Gloria then and Hugh and Esme now? What does all of this have to do with the armed robbery? Where is Lacey heading to with her story?

All of it well spun by Ellen in this second installment. Despite the lengthy descriptions at places, it was an interesting read considering it involved unsolved mystery from past. Again Lacey's friends get involved in helping her, saving her and at times hindering her in the investigation(s).  We get to see a lot of chemistry between Miguel Flores - employee at Bentley's Boutique who took a beating - and Stella Lake - owner of Stylettos and friend of Lacey - which is a refreshing and comical side-plot in the book. Damon Newhouse from Conspiracy Clearing House - hosting the Deadfed dot com website - tangles with her in getting the latest scoop for his conspiracy theories pertaining to the government.  Chemistry between Damon and Brooke Barton - attorney and best friends with Lacey - flickers in this book. Not to forget the love-hate relationship Lacey has with Vic Donovan - who is currently working on getting divorced from his wife Montana. Curious to see where their relationship lands in future books.

As said above, an easy murder-mystery read tying up all the elements of fashion together beautifully. Signing-off with the tidbit from Lacey's Fashion Bites that she writes for The Eye.

Hostile Makeover is the third instalment in the Crime of Fashion Series by Ellen Byerrum published in August of 2005. The is also the second Lifetime Movie that was made based of the book in the series. I wonder why the remaining books werent made into movies, would have loved to watch them. Lacey Smithsonian - the heroine of the series - works for the paper The Eye Street Observer as a fashion reporter in Washington, D.C. - a city she keeps calling as "The City Fashion Forgot". Lacey snags another opportunity - interviewing the reality TV makeover success story Amanda Manville - which is right up her alley. And straight lands into another mystery - Amanda asks her help in stopping a deadly stalker. Despite Vic's caution - her boyfriend or going to be boyfriend depending on the divorce - she starts her own investigation taking all the help she needs from her friends. Now where does this investigation into Amanda's stalker lead her to? What is behind the big Makeover Madness that nobody want to unearth and could even go to the extent of murder to keep it shushed?

This time around however, Lacey gets to experience first-hand what would happen to be even in the shadow of the infamous office jinx - Harlan Wiedemeyer - starting with the narrow escape she has from the falling Krispy Kreme Donuts sign on Harlan's brand-new Volvo. Harlan was a new The Eye Street Observer reporter who covered the "death and dismemberment" beat for the paper. And he has a crush on Felicity Pickles - the resident food blogger / reporter for the paper.  A message left on her answering machine by Marie Largesse - the friendly neighborhood psychic - warning her of some kind of jinx whirling around her head doesn’t make her any happier even though she doesn’t believe in Marie's readings.

Her run-ins with the resident weather reporter, Cassandra Wentworth arent any peaceful either. In all the midst of this she has a romantic getaway with Vic Donovan and an impending visit by her mother and sister. Only place she always finds solace is in either Vic's arms when he is with her rather than trying to fight Montana and when she is digging through her Aunt Mimi's bottomless trunk, that is filled with fabulous vintage clothes, fabrics, patterns and fashion memorabilia.

As said above, an easy murder-mystery read tying up all the elements of fashion together beautifully. And the fashion bites and columns by Lacey continue to spur interest in me. Signing-off with the tidbit from Lacey's Fashion Bites that she writes for The Eye.

Lacey Smithsonian's Fashion Bites: Life Is Not a Dress Rehearsal; You're the Star; Don't Dress Like the Understudy!

You and I may not have Bette Davis's fabulous wardrobe (courtesy of Orry-Kelly) to help us shed our ugly-duckling shells and reveal our beautiful inner swans. But we can borrow Bette's attitude that says, I'm not the understudy. I'm the star.
Collapse