The second book in the series Percy Jackson & The Olympians was titled The Sea Of Monsters and published in April of 2006. Rick Riordan continues the adventures of the demi-god Percy Jackson (son of mortal woman and the Greek go Poseidon) in the new school that Percy joins the following year. He is thirteen year old in this book. The movie version of the book was released in 2013 which I havent watched yet. So my take is solely based on characters imagined from the first movie/book and new ones introduced in this book. 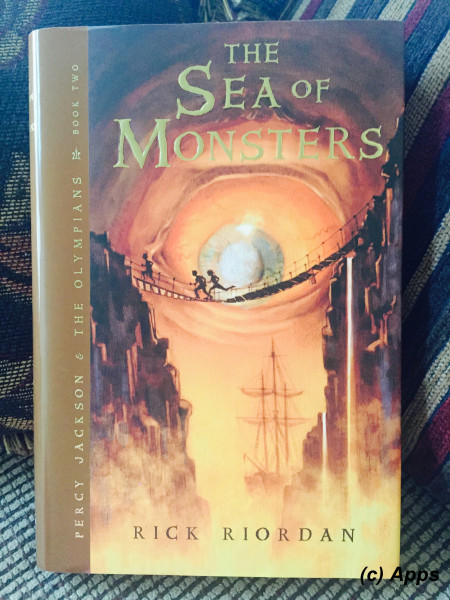 The story starts with Percy in a new school where an odd kind of child - Tyson - is being bullied by kids who are human-form of Laestrygonians - giant cannibals from Greek mythology. Annabeth comes to Percy's rescue when he tries to defend Tyson and takes them to Camp Half-Blood. They arrive at a point when the camp is being attacked by two bronze Colchis Bulls. Tyson defeats them and saves the camp. However Thalia's tree has been poisoned so the camp is left vulnerable to attacks. Percy dreams of Grover and realizes that Grover is captured at some place where he found The Golden Fleece - the fleece of the gold-hair[a] winged ram, which was held in Colchis - that can help cure Thalia's tree of it's poison. The camp also has new counsellor - Tantalus who refuses to send Percy on a quest for the fleece. Instead the prophecy is given to Clarisse La Rue - daughter of mortal woman and Greek God Ares. This time the prophecy reads:

You shall sail the iron ship with warriors of bone,
You shall find what you seek and make it your own,
But despair for your life entombed within stone,
And fail without friends, to fly home alone.

Clarisse sets on her quest to find the Golden Fleece while Percy, Annabeth and Tyson runaway from the camp to find Grover. Thus begins the second adventure for Percy Jackson. He comes across Luke again in this episode but not as an ally but as a foe. They - Percy, Annabeth and Tyson - get attacked by various monsters through this adventure - a hydra on a swamp; a sea monster named Charybdis; Scylla - another sea monster who lived on the opposite side of where Charybdis lived; the sorceress Circe - daughter of Hekate - who runs a spa and resort luring men to her island and turning them to pigs; crew of notorious pirate Blackbeard - son of Greek god Ares and finally the Golden Fleece.

An amazing ride it was for me through the wonders - some astonishing and some frightening - of this book. Read through it yourself to see what the prophecy given to Clarisse means. How it impacts their search for Golden Fleece and what do the camp half-blood demi-gods learn in the end. It wasn’t too hard to visualize the characters and at one point they became too real for me. All this had put me on edge and craving for the next book in the series to see what the fate of the rest of the half-bloods would become of.

Titan's Curse is the third installment of the Percy Jackson & The Olympians series by Rick Riordan and published in 2007. Looks like the trailer for the movie version of this book has been released in February of this year although there has been no official release date. I am not even sure if the trailer is a valid one. Here's the first look at the trailer.

However, here is my take on the book. In this book the plot revolves around now fourteen-year old demi-god Percy Jackson (son of a mortal woman and Greek god Poseidon) as he takes help of his friends to rescue Annabeth Chase, another demi-god and his love interest - daughter of mortal man and Greek goddess Athena - and the Greek goddess Artemis - Goddess of Hunt, Forest, Hills, Archery and the Moon - both being kidnapped. This book also shows the remaining journey for Thalia Grace after her soul has been restored and her body is returned in the previous book, The Sea of Monsters. 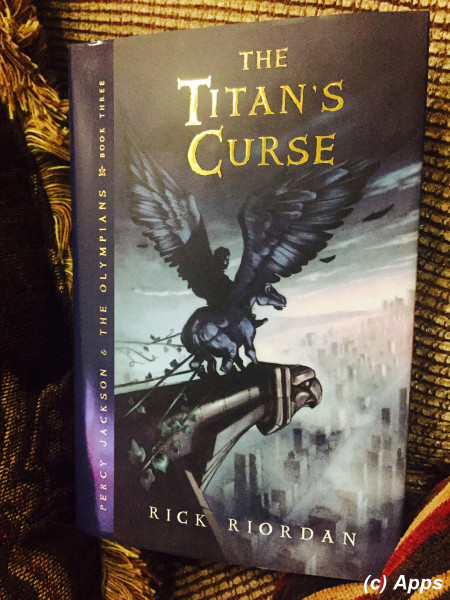 As chaperones in delivering the two sibling half-bloods Nico and Bianca di Angelo; Percy, Annabeth and Thalia face the manticore named Dr. Thorn - Persian legendary creature similar to the Egyptian sphinx. It has the body of a red lion, a human head with three rows of sharp teeth. Dr. Thorn kidnaps Annabeth in the fight the ensues even though Artemis and her hunters come to aid. Artemis goes on her own to hunt an Olympus-destroying monster while the hunters and the remaining half-bloods are sent back to Camp Half-Blood along with her brother Apollo - Greek god of Sun. While at the camp Percy and Zoe Nightshade - lieutanant to Artemis - have similar dreams about Artemis and Annabeth being in danger. Another prophecy by the Oracle is delivered to Zoe shortly which is as follows:

Five shall go west to the goddess in chains,
One shall be lost in the land without rain,
The bane of Olympus shows the trail,
Campers and Hunters combined prevail,
The Titan's curse must one withstand,
And one shall perish by a parent's hand

Thus starts the journey again for Percy, this time a lot more at stake than he could bargain for. He along with his friends travel West per the prophecy to free Artemis. In the process they meet monsters and foes / allies alike - more than one confrontation with Luke Castellan (a demi-god son of mortal woman and Greek god Hermes); Atlas - the general of Titan army; Nemean Lion; Ermythian Boar; encounter with Greek gods Ares and Aphrodite; Spartoi - skeleton armed with weapons; Nereus - eldest son of god Pontus and Gaia; Frederick Chase - Annabeth's father and the dragon Ladon. Also one gets to see the lives and paths of Thalia, Zoe and Nico along-side; all working to prevent the onset of the Great Prophecy.

This returns me to the prophecy proclaimed in this book. There was so much grief, hurt and loss in this prophecy that I had actually taken a break to read this book after this chapter. However, I renewed my feelings towards it and finished reading it successfully. Glad I did because there were so many places I visited and so much more about the characters I learned. That has made me continue reading the series.

All in all another good book to pick up and read.
Collapse