Mara's Luncheonette was the one hang-out place in Cabot Cove, Maine along with Worrell Mansion. An agreement that was written between then town and the Worrell family's patriarch 100 years ago, it had been held in trust with the town provided it is maintained and used by the town as a conference center, park, retreat and playground. The agreement gets renewed every five years. As the last surviving family member, Jared Worrell, had been fulfilling those terms. However this particular year, he announces that the Worrell Mansion has been sold to an investment banking firm who would renovate the mansion into an art colony. That, my dear readers, is the center of the plot for this 1995 book Brandy & Bullets written by Donald Bain and Jessica Fletcher. 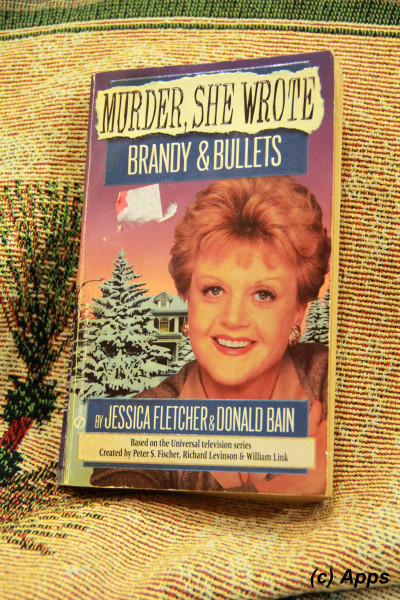 With much opposition from the town, Corcoran Group renovated the Worrell Mansion into Worrell Institute of Creativity. During the opening gala tour, Jessica learns that the art colony was not just for artistes and writers to pursue their passion, but also give them ability to get over the block, if they face any. All sounds well and good except that a classical musician by name Maureen Beaumont kills herself with a gunshot to head. Followed by an attempted suicide by another resident artiste. What made it worse was Jessica's friend Norman Huffaker admitted himself into the institute but goes missing a few weeks after he starts staying there. And surrounding all was the political conspiracy that Jessica gets pulled into by Sybil Stewart, Cabot Cove's new mayor.

Enough was enough for Jessica, and she plunges into the suicide / murder mystery to solve it and as well find her friend Norman hoping that he doesn’t end up dead too. What exactly went inside the four walls of the so called institute? How is Norman's disappearance linked to Beaumont's suicide? Why is Sybil so against Jessica's opinions? With her tenacious brain, she marches forward to find the answers even goes to the extent of putting herself in the institute for a weekend just so she is closer to the scene of crime. Will she find her friend Norman? Will she conclude that Maureen Beaumont was murdered as opposed to suicide as it seems? Well, read through this wonderful book to know more.

Stars: 2 / 5
Recommendation: Not something I would pick even it seems an easy read.

Manhattans & Murder was the second book by Donald Bain and Jessica Fletcher based on the famed TV series Murder, She Wrote. First published in 1994 the plot in this book takes places in the Big Apple. This was not a particular favorite of mine. Perhaps Donald was still trying to bring the TV Jessica Fletcher into the book accurately (his first book Gin and Daggers had inaccuracies much to the disappointment of fans) or the plot was too scattered. Whatever the reason the book took a while for me to finish even though its under 300 pages. 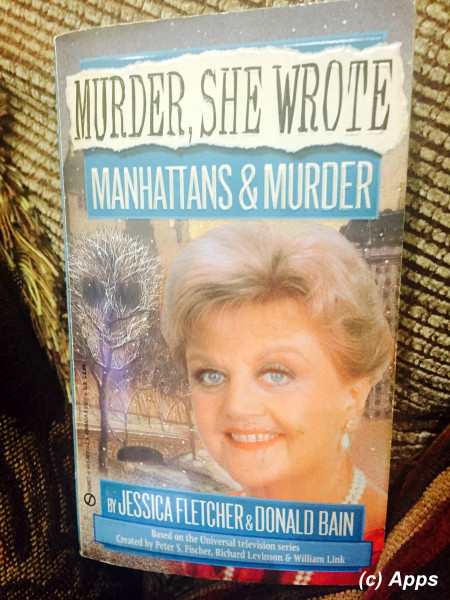 Jessica Fletcher goes to New York to promote her new book for Christmas. Amongst the book signings and appearing on Larry King Live she had planned to do some much needed shopping - buying Christmas gifts for her friends and items that they have asked her to bring. Little did she expect to meet an old resident of Cabot Cove there and pulled into solving his murder. Waldo Morse who was a resident in Cabot Cove had been last seen ten years ago. Nobody knew where he went but he hadnt left Cabot Cove in good terms. There was conspiracy surrounding him that added to the mystery. Accidentally Jessica bumps into Waldo who at first gets irritated and angry that she recognized him but later asks to meet her the next day. What does happen the next day? You guessed it. Waldo gets shot right in front of Jessica. And the Detective on the scene, Alphonse Rizzi, happens to be a Narcotics one. What surprises her was why a Narcotics detective was on a murder scene and more so how he had arrived in such a short interval of time. While she was still reeling from the shock, she gets bombarded by the reporter Bobby Johnson who doesn’t take no for an answer.

With all that was planned for her visit, she couldn’t afford to miss it. However, she was determined to find out why and who killed Waldo Morse. She meets Joe Charles an acquaintance of Waldo Morse and his  girl ends up dead later. She meets Nancy Morse and she ends up moving away from her current location. Ruth Lazza, the publicity director for her publisher Vaughan Buckley wasn’t making her life any easier. She was all set to cash-in on the news item that Jessica had become because of the murder no matter how much Jessica didn’t like it. What was the connection between Detective Rizzi and Joe Charles? What was Nancy Morse hiding? Where has she disappeared? Was she dead too? And why is Detective Rizzi acting strange?

Jessica's head spins thinking about all the things going wrong around her from the day she saw Waldo Marsh on the street dressed as a Santa. So does our head when we read through it. The folds in the plot were so many, that some of them stuck together thus making the reader miss the lines in between. And don’t forget the fact that the author made Jessica travel from New York to Cabot Cove and back to New York in a matter of 12 hrs which included her meeting the wife and also settling in her home. How can that be possible unless Jessica was using a time traveling machine? Huh! The finale - well what can I say. I like a good ending where the victim or their family gets justice. Here the justice was mis-guided and was not something my stomach could take it. And above all the character Jessica Fletcher itself came with so many flaws. Someone who is portrayed as a genteel and poised, she was shown as scattered and dull.

Well, all in all a book that I could have missed reading it and wouldn’t have regretted it. Sadly!
Collapse